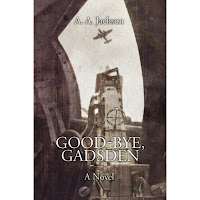 Gadsden, Alabama - 1943. World War II is being waged on three continents, far from the small Alabama city where two gold stars hang in the front window of the Winstead residence for two sons sent to fight, one in North Africa, one in the Pacific. The oldest returns home that same year to be buried in a community cemetery. Another will return only months later, an amputee.

The family's story is recounted by the youngest son, John. Still in high school John takes a summer job at a downtown dry cleaners and is seduced by the owner, Sylvia Barnes, a married woman six year his senior, with whom he falls deeply in love. Fearing retribution when the affair is discovered, John's lover flees Gadsden.

Despondent and guilt-filled, John implores his best friend to leave high school and join the Army Air Corps. During the final leg of their training the two friends are separated, only to be reunited during the waning days of the war, part of a crew of diverse and colorful airmen whose solidarity and courage will be fiercely tested as the air war rains death and destruction from the skies above Japan.

When their B-29 is shot down, the two friends find themselves perilously adrift in a life raft. The raft is spotted by a passing enemy fighter, marking the end of the war for John, and nearly his life. Ailing in spirit as well as body, John returns to Alabama, still a teen, matured to manhood by the raw brutality of war and loss. He renews the search for Sylvia, a search that takes John far from Gadsden and ends a decade later across an operating table in a rural hospital in the mountains of Appalachia.

A.A. Jackson
Alice began writing poems and fictional stories while still in elementary school. Writing became her lifelong dream, a dream encouraged by the three aunts who played a pivotal role in her young years. Much of those early years were spent with the aunts in Fairmont and Grantown, West Virginia, where reading was Jackson’s favorite past time, along with playing baseball in the ‘holler’ below her Aunt Alice’s home. After retiring as a journalist, she began writing her first novel, Good-Bye Gadsden, set in World War II, about a young man coming of age in wartime, and the traumatic impact of the war on his family and their small southern community. That was followed by Deadline in Dallas, a thriller whose protagonist is a Dallas news anchor pursuing a story of drug smuggling, money laundering, and murder that leads back to the man to whom she is engaged, the mayor of Dallas. Alice is currently working on several other projects, including a children’s story set in Morocco.